Films are held monthly on the first Thursday of the month,
at the Anglesea Fire Station community room, Great Ocean Rd. Anglesea
at 7.30 . Parking available in McDougal st.
​
Light refreshments and a chat about the film too!
Cast your vote to review the film on the night. 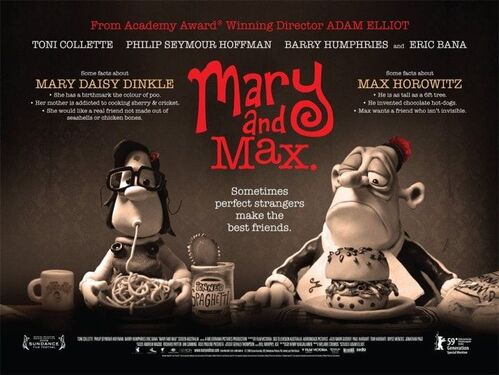 MARY and MAX
Thursday 1 August
7.30 Anglesea Fire Station
​
Surf Coast Film Society
This 2009 stop-motion animation of the Australian writer/director/designer Adam Elliot is nothing if not distinctive and well worth a screening we thought.
Spanning 20 years and two continents, "Mary and Max" tells of a pen-pal relationship between two very different people: Mary Dinkle, a chubby, lonely eight-year-old living in the suburbs of Melbourne, Australia; and Max Horovitz, a severely obese, 44-year-old Jewish man with Asperger's Syndrome living in the chaos of New York City. As "Mary and Max" chronicles Mary's trip from adolescence to adulthood, and Max's passage from middle to old age, it explores a bond that survives much more than the average friendship's ups-and-downs. Like Elliot and Coombs''Oscar(R) winning animated short "Harvie Krumpet", "Mary and Max"is both hilarious and poignant. Review by Rotten Tomatoes

Please note that details may change if circumstances determine!